Heidi and Eze were introduced by mutual friends in Hong Kong and after a little over a year of dating, the couple decided they wanted to spend the rest of their lives together. Heidi was drawn to Eze because of his mature spirit and thoughtfulness, while Eze fell in love with Heidi by seeing how she constantly cares for the people around her. Both adventurous souls, they wanted to celebrate by taking a trip that would allow them to explore new places AND get their bridal photos taken before their wedding day.

When they first heard of the Wave near Kanab, Utah, they immediately wanted to see the beautiful rock formation for themselves. The Wave is a special location not only because of it’s rolling rock layers made of sand, but because it requires a permit with limited availability to be able to visit. Only twenty people are allowed to make the trek per day, and these twenty  people are selected by two separate lotteries: One can be accessed online by people all around the world, and the other is an in-person lottery held daily in Kanab. Ten lucky individuals are selected from each of these lotteries. People put their names in the ring for years hoping to win the chance to see this natural wonder, and it’s a great celebration if and when they are finally selected. 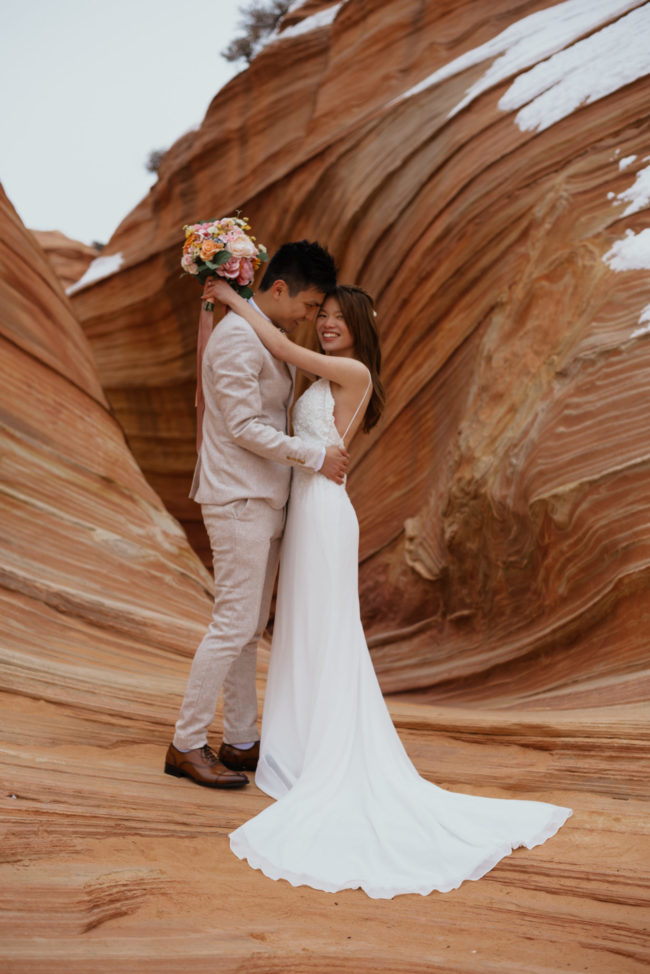 The couple had an early start with the help of hair and makeup artist Mikayla Brown, at 6 am to get ready for their big day. After traveling all the way from China, Heidi and Eze won the lottery for three people, themselves and their photographer, to hike out to the Wave.
After hiking three miles in thick fog and with the help of Google Maps the group found their way to the Wave and began the shoot of a lifetime. Once they finally arrived at their final shooting destination, the couple changed into their formal attire and they started shooting. 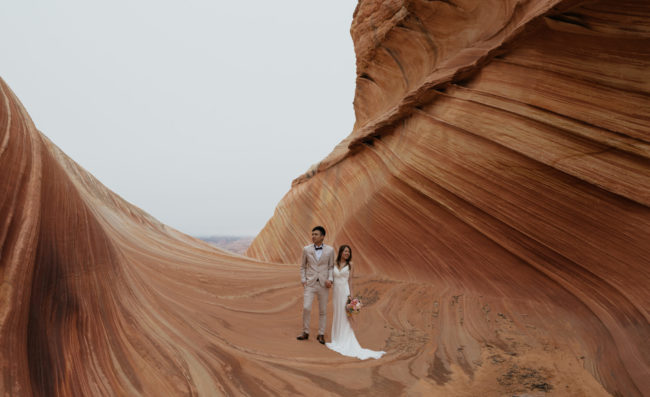 “There was no shortage of “good shots” — everywhere we turned, there were distinct wave patterns in the rock that made every frame unique. It was around 37 degrees at the location, so between shots we would take breaks and Heidi would get warm in her coat. These breaks allowed us to look around at the scenery uninhibited by the camera and sit in the moment a little bit longer,” said photographer Meghan Beatty.
The bride wore a stunning dress with a delicate low back and embellishment detailing, while the groom wore a tan suit and black bow tie. The chic attire contrasted perfectly against the red rock surroundings. 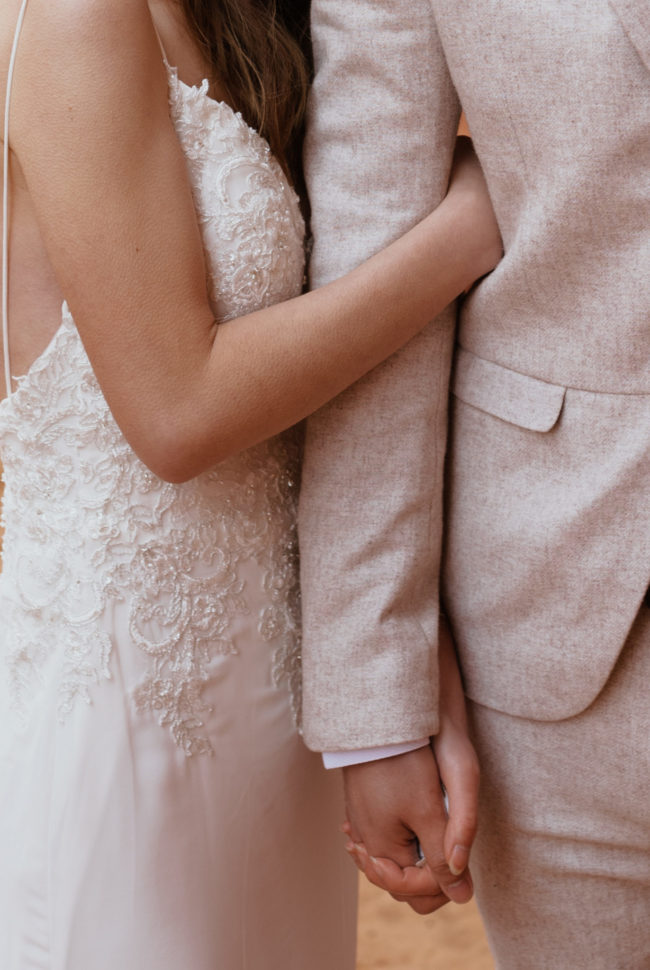 “By the end of the session, we were almost freezing cold, and so extremely happy that we had made it! The dream that Heidi and Eze had of visiting the Wave, and having their once-in-a-lifetime photos taken there, was complete! We warmed up by making the journey back to the parking lot and enjoyed the rest of the evening feeling positively content at the crazy day we had just experienced,” said Beatty.

This bridal session transcended across all seasons with the fresh, airy style in attire that are reminiscent of summer weddings, paired with a bridal bouquet filled with spring blooms. The background of snow capped bringing in the feeling of winter contrasting with the red rock and earth tones that bring thoughts of autumn into the shoot. In this once and a life time location all seasons of the year can be seen and they blend perfectly to create a picturesque setting.

To see more of Heidi and Eze’s one of a kind bridal shoot scroll down. 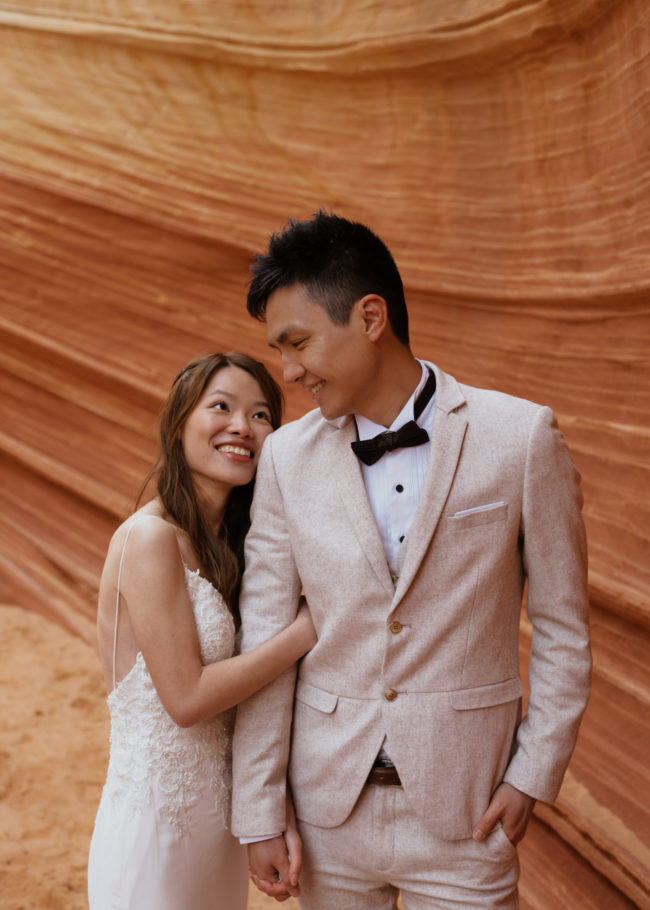 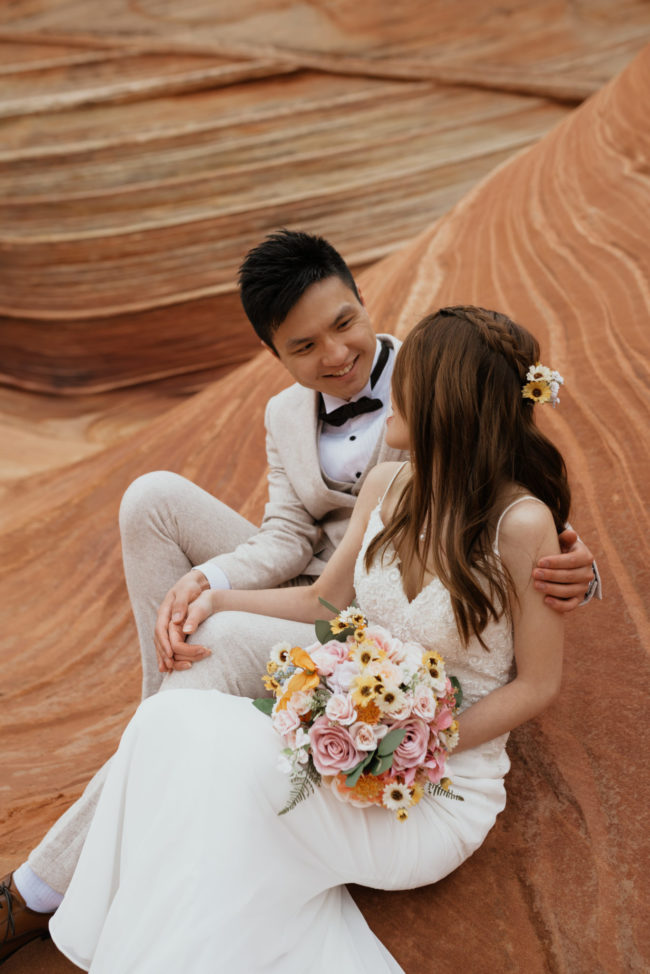 Behind the Lens: Brittny Hart

A Timeless Celebration at Twenty and Creek